ARTWORKS collaborates with Delta Restaurant at the SNFCC

ARTWORKS collaborates with Delta, the newly arrived fine- dining restaurant by Dipnosofistirion at the Stavros Niarchos Foundation Cultural Center (SNFCC) and presents works of Greek artists in the restaurant’s venue. Delta was created through an initiative and a grant by the Stavros Niarchos Foundation (SNF). It aims to become a landmark culinary destination in line with the high standards of the SNFCC and to share Greek cuisine around the world.

The creation of a pioneering restaurant at the SNFCC complements SNF’s vision for the cultural institution, which is public space for visitors from Athens and around the world, but also a model of environmental sustainability in terms of design, construction, operation, and footprint in the wider ecosystem. The design of the restaurant, contemplating on the idea of built and natural landscapes in order to create a multi-sensorial experience and connect to cognitive processes, was undertaken by the award-winning firm Kois Associated Architects.

Delta embraces art and organically integrates yearly rotating artworks in its interior and surrounding spaces. The artists presenting their work at Delta Restaurant, are awardees of the Stavros Niarchos Foundation Artist Fellowship Program. Following the concept of sustainability, we are invited to think of art as part of diverse ecosystems and interdependent interactions. The works explore the relationships between natural and digital environments, knowledge and emotion, corporeality, architecture and landscape. They incorporate mythological references into contemporary reflections and connect visual and tactile elements.

The five artists presenting their work at Delta Restaurant are Manolis Daskalakis-Lemos, Dimitris Efeoglou, Katerina Komianou, Petros Moris and Malvina Panagiotidi. They are all awardees of the Stavros Niarchos Foundation Artist Fellowship Program designed and implemented by ARTWORKS. 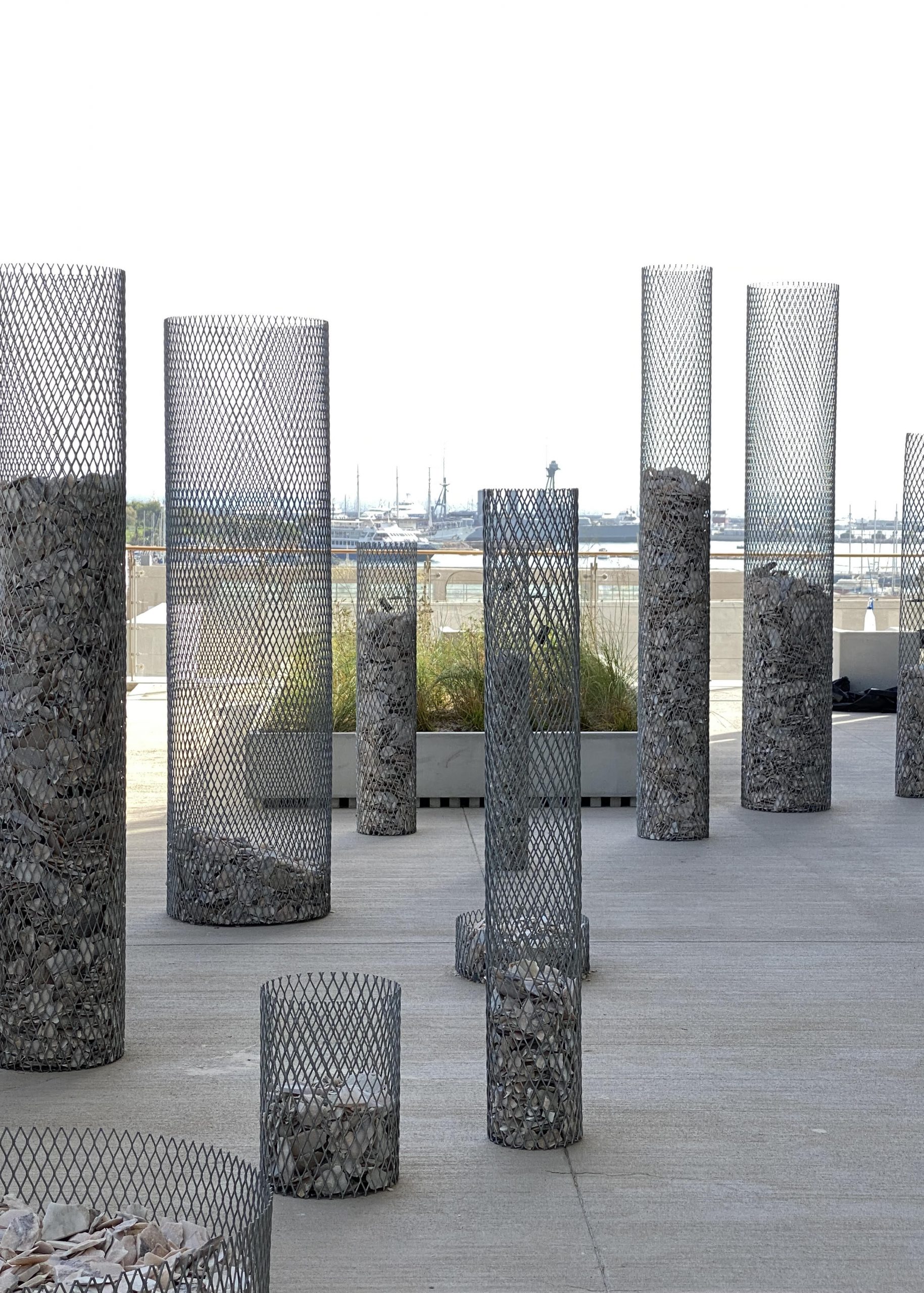 Feelings (2018-2118), 2018, by Manolis Daskalakis-Lemos, is a sculptural installation of pillars made of a rebar grid and pieces of marble that look like three-dimensional charts. In collaboration with a team of Artificial Intelligence (AI) researchers, the artist reflects on the applications of neuronic networks and deep learning in art through gestures that go beyond the manmade. His monumental-scale project converses with the Stavros Niarchos Foundation Cultural Centre’s architectural elements and construction sites, relics of modernism (both physical and conceptual), and archaeological monuments. 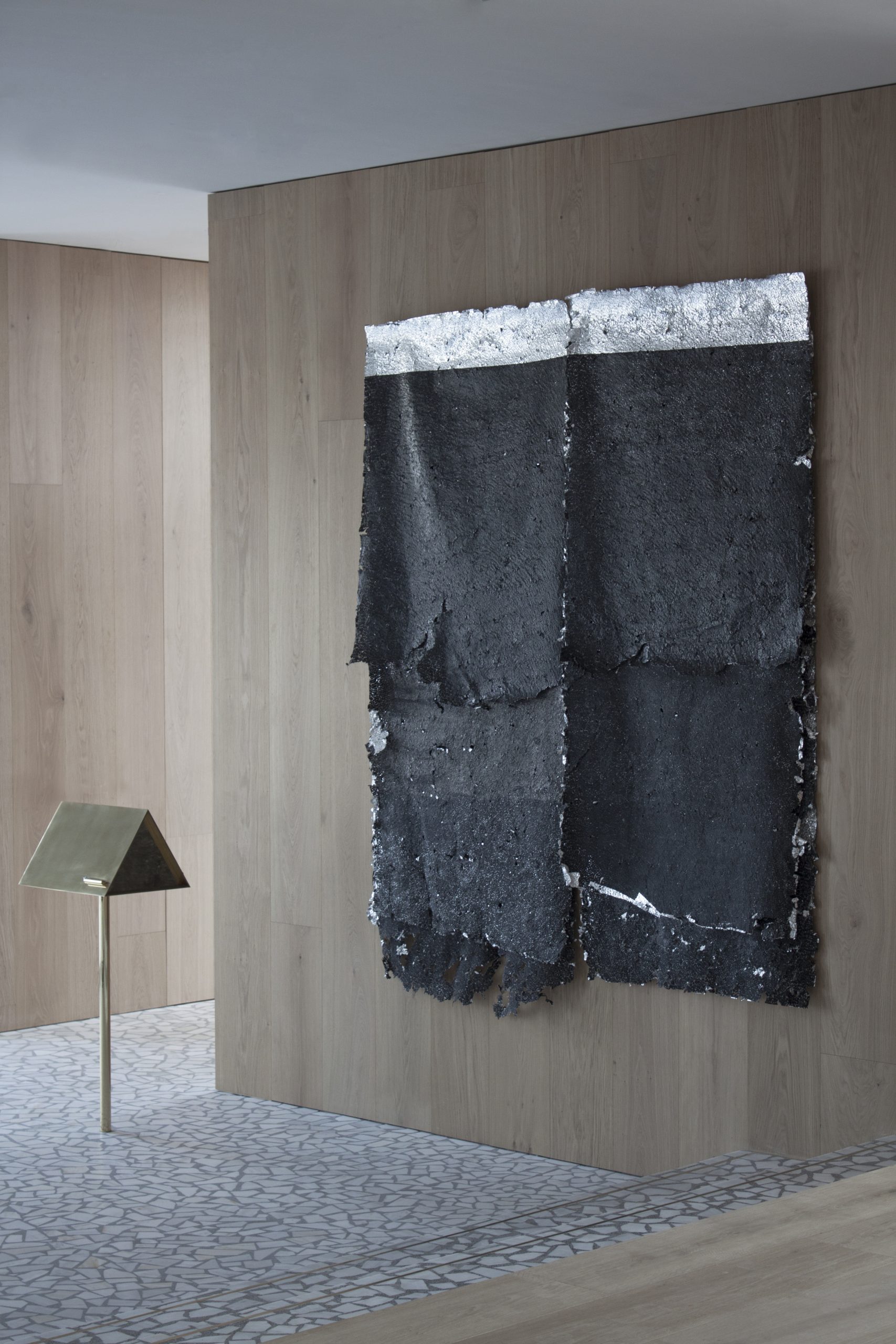 Dimitris Efeoglou’s work titled Amplitude#2 (2019) revolves around different forms of abstraction and is placed at the intersection of painting and installation. The characteristic thick layers of the colours he uses mark the beginning of a journey towards creating distorted spaces: environments that express uncharted topographic areas. The method of construction erases every trace of representation. The length of the creative process is notable and significant. In this prolonged time, there is a series of sculptural transformations of the paper surface, opening up a fresh perspective on the notion of painting. The work tells the story of its construction through the interweaving of visual and tactile information. It develops as a sound pattern through the rhythmic and repetitive movement of the artist’s hand. It creates a vibration, and slight tensions, while the paper itself wears away. 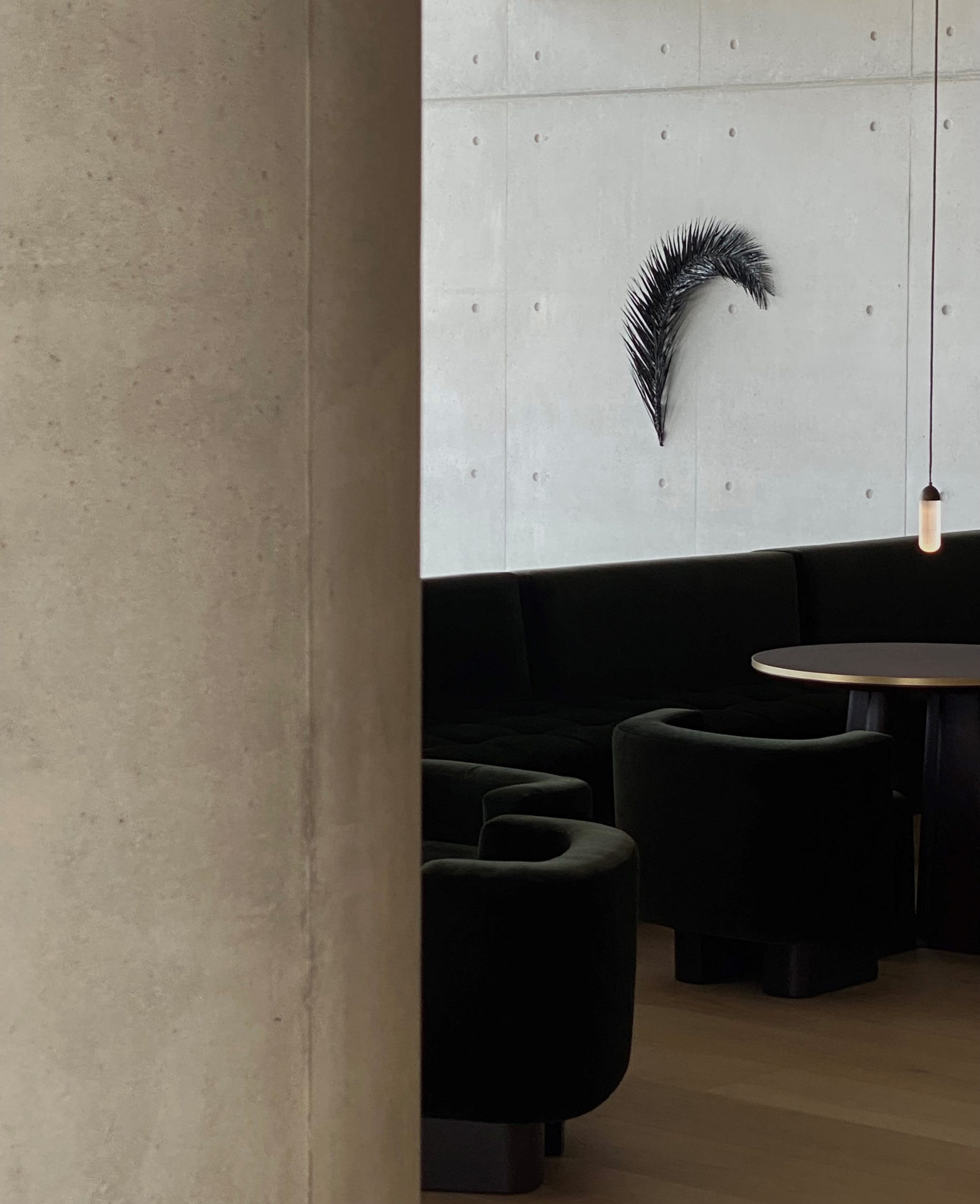 Katerina Komianou presents the work she stands alone (2019), using bronze for its sculptural and metaphorical qualities. As an Athenian and Athens based artist she sets her gaze upon the collective memory that is imprinted on public spaces. Katerina chooses her points of interest, based on the city’s movement. Monuments and plants are carefully chosen to be charged with the historical memory of the city. Not only in monumental terms of antiquity but also the effect of open spaces on everyday life. This reuse of the city fragments gives new access to the ongoing history and the memory that forms the present. 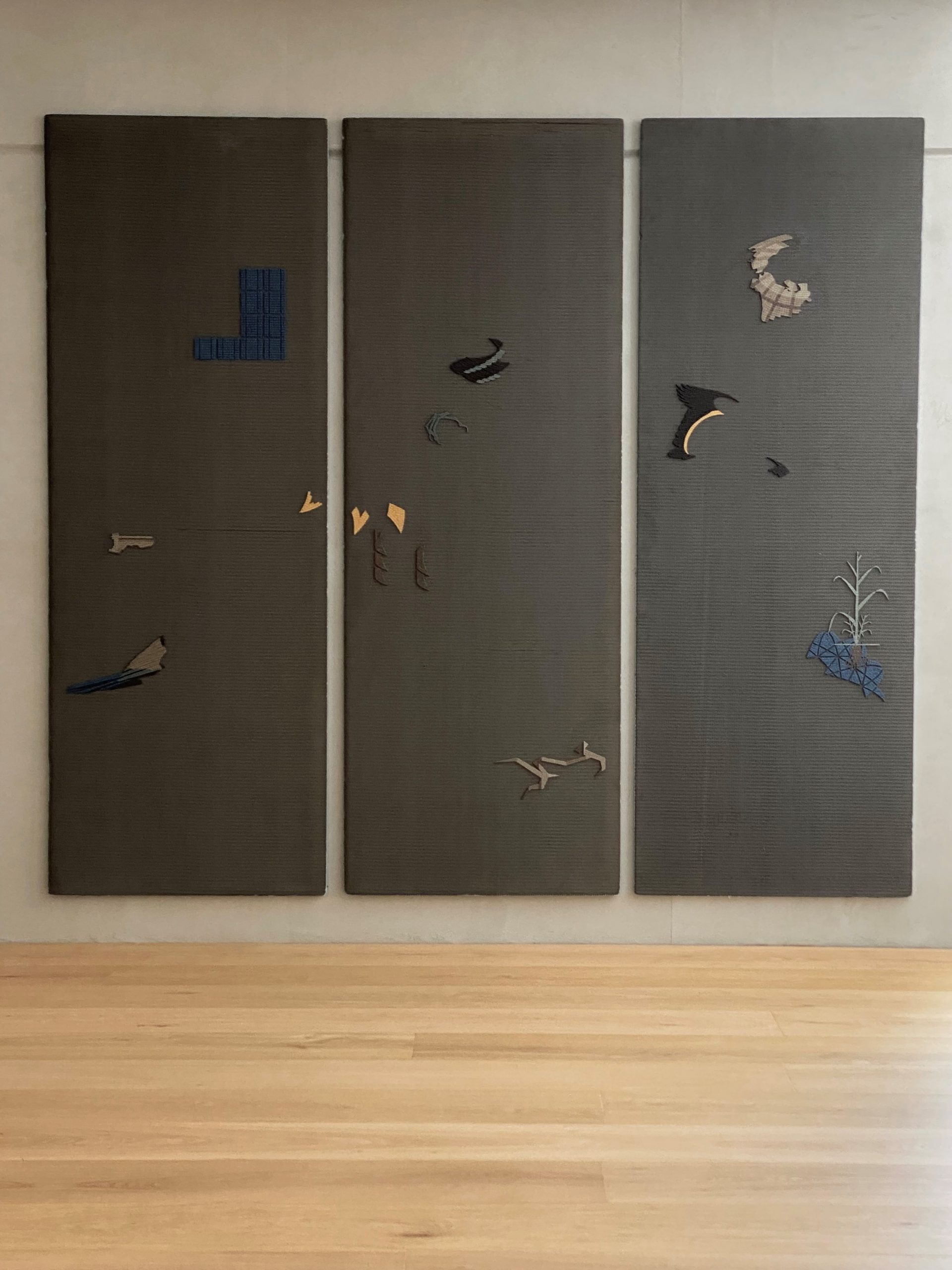 Commons (2013) by Petros Moris is a series of ceramic-tile mosaic compositions constructed on structural panels. As their primary visual resource, they employ a collection of public domain vector graphics: a type of digital material representative of a distributed and accessible ethos of contemporary production and a special kind of digital cultural heritage. Highlighting the procedural nature of the mosaic technique, the Commons works remain fragmentary and partial, morphologically positioned between representation and abstraction. Simultaneously resembling works in progress and contemporary fragmentary ruins, they refer to an elliptical process of digital-material translation. 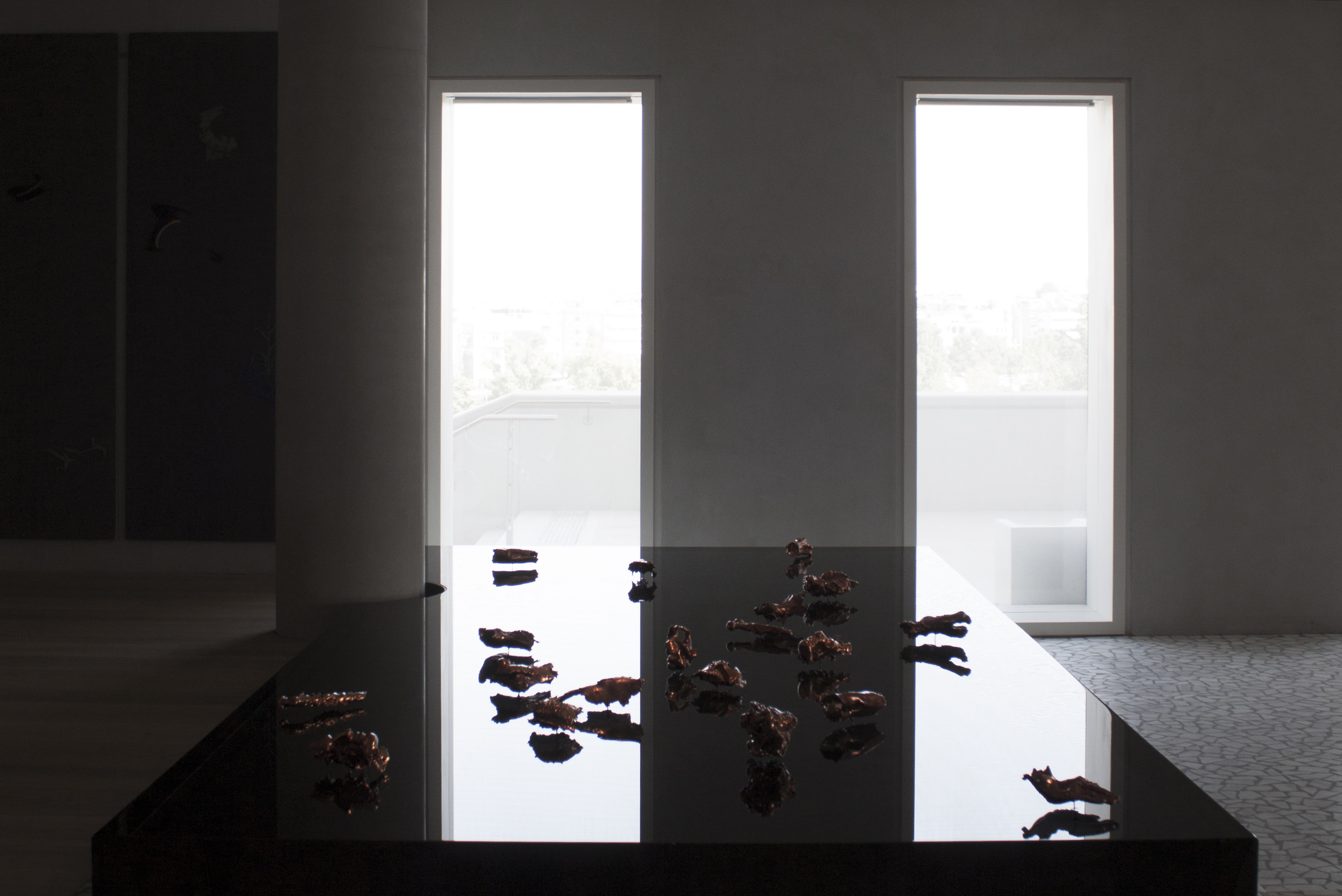 Malvina’s Panagiotidi work Answers without questions (2019) consists of 20 body part sculptures that form a complete body. It is inspired by the epic “Pharsalia”, written by Roman poet Lucan. According to the poem, the witch Erichtho is practising necromancy using dismembered bodies she collected from the battlefield in order to have an oracle and foresee the future. In a reverse procedure, the 20 body parts are sculpted in wax using casts of the artist’s own body burned and transformed. These sculptures are then electroformed with copper, and the wax is melted away, leaving the copper body parts to be assembled. This newly constructed body can only provide questions and not answers about the future.

Manolis D. Lemos (b. 1989, Athens) is an artist and musician who lives and works in Athens. He has studied at the Athens School of Fine Arts (BFA, MFA) and Central Saint Martins College of Art & Design at the University of the Arts in London. Manolis is a founding member of Serapis Maritime and Arbit City.  He has presented solo exhibitions in museums and galleries, including Palais de Tokyo, Paris, where he was an artist-in-residence (2016-17); Galeria Duarte Sequeira, Portugal; CAN Gallery, Athens; and REH Transformer, Berlin. He has participated in international group exhibitions, including the latest New Museum Triennial, Songs for Sabotage; Filter Bubble, LUMA Foundation, Zurich; The Equilibrists, organized jointly by New Museum, New York and presented at the Benaki Museum in Athens and Tomorrows, Onassis Stegi, Athens & Nantes. In addition, he has been part of the various initiatives of 89plus, an international research project co-founded by Simon Castets and Hans Ulrich Obrist. In 2018, he was awarded the Stavros Niarchos Artist Fellowship through ARTWORKS.

Petros Moris (b. 1986, Lamia) is an artist based in Athens. His work develops in the expanded field covering sculpture and writing and contemplates the dynamics between the various manifestations of memory, entropic material and social processes, as well as the anthropogenic concept of the future. He has received a BFA from the Athens School of Fine Arts and an MFA from Goldsmiths College, University of London. He has been nominated for the DESTE Prize (2015) and awarded the Spyropoulos Prize (2012), the Stavros Niarchos Artist Fellowship through ARTWORKS (2018), and an Onassis Foundation Scholarship (2017-19). He was also a Delfina Foundation resident in 2019. He has presented solo exhibitions in galleries and art spaces, including Galeria Duarte Sequeira (Parada de Tibaes, Portugal); Project Native Informant (London); Point Centre for Contemporary Art (Nicosia); ROOM E-10 27 (Berlin); Union Pacific (London); SPACE (London); the Cyprus Embassy in Athens; and Onassis Stegi. In addition, he has participated in international group exhibitions and events, including the Singapore Biennale 2019; the 2019 Thessaloniki Biennale of Contemporary Art; the 4th New Museum Triennial (New York); the exhibitions The Same River Twice and The Equilibrists, both organized by the DESTE Foundation and New Museum, New York and held at the Benaki Museum in Athens (2015 and 2019). He has curated exhibitions and events at the Chisenhale Gallery and the Whitechapel Gallery in London, the art space Circuits and Currents in Athens and the Athens Biennial. He has been part of the art collective KERNEL, the online curatorial collaboration SIM, the curatorial project Radical Reading. He also runs the publication project AM.

Malvina Panagiotidi (Athens, 1985) lives and works in Athens. She studied architecture at the University of Thessaly and is a graduate of the postgraduate program Art in Context, offered by the Berlin University of the Arts. Malvina has been awarded the Spyropoulos Prize (2016) and the Stavros Niarchos Foundation Artist Fellowship (2018) through ARTWORKS. Her artistic practice focuses on the points of contact between occult modernism, the function of the imaginary and instances of uncanny human behaviours observed in different sociopolitical contexts. Selected shows include: When you touch about me, I think myself, Signs, Istanbul (2020); Gone today, here tomorrow, AnnexM – Athens Concert Hall (2019); All Souls Day-Part II, Rodeo Gallery, Piraeus (2019); Constellations in the dirt, NEON Organization for Culture and Development & Ephorate of Antiquities of Cyclades, Kouphonisi Archaeological Collection building (2018); It was evening all afternoon, You cannot hide for more than seven years project space, Athens (2018); The Equilibrists, organized by DESTE Foundation & New Museum, New York and presented at the Benaki Museum, Athens (2016); Hypnos Project, Onassis Stegi, Athens (2016); The predictions of a one-night king, Chalet Society, Paris (2015); and A monument for the first homosexual emancipation movement, HKW, Berlin (2015). She is also a founding member of the artistic research group Saprophytes.

Delta is the uppercase 4th letter of the Greek alphabet. A triangle with three sides in perfect harmony. Just like Delta restaurant. A project shaped by three principles: Gastronomy – Sustainability – Culture