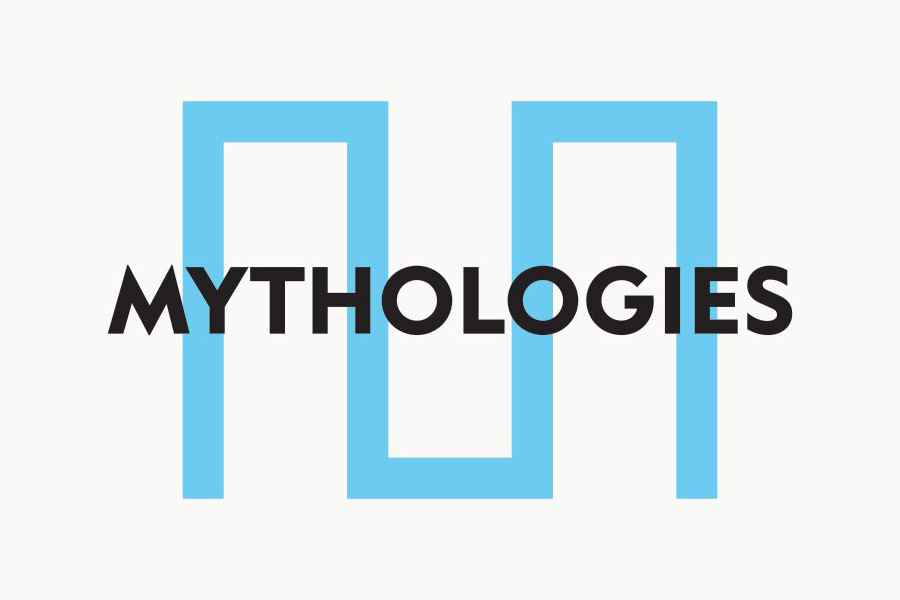 The Stavros Niarchos Foundation Cultural Centre (SNFCC) welcomes summer at the Dome by transforming it, in collaboration with ARTWORKS, into a welcoming new terrain – a meeting place for the public, featuring works of contemporary art that propose modern readings of Greek mythology in an inventive architectural design.

MYTHOLOGIES | NEW TERRAINS exhibition at the SNFCC Dome comprises sculptures, installations and an augmented reality application that explore our age-old complex relationship with mythology, assessing its relevance to our reality and its potential to push the limits of our imagination. A total of 13 works of contemporary art are juxtaposed to the scale of the Dome itself – mythical figures emerge in a new version of cosmogony, pointing to the sub-terrain, the archaeological past, the technological and digital realms, and science fiction. Eleni Papanastasiou’s architectural design includes a highly mobile seating system that encourages non-hierarchical, unguided movement around the exhibits and creates a feeling that the body finds itself in the center of a sphere.

Four contemporary artists –Theodoros Giannakis, Petros Moris, Panos Profitis, Valinia Svoronou– exhibit works that contain direct mythological references and propose new interpretations of ancient archetypes. The artists attempt to unveil the mechanisms by which beliefs we now take for granted have been constructed and consolidated. At the same time, the artworks on view examine the function of myth, its relationship with the notions of nature and culture and the use of myth in the narrative of current events, while recalling the often-subversive power of mythology. The artists observe the ever-shifting condition of myth and suggest surprising, playful and constructive ways to challenge dominant narratives; they appropriate and rewrite the body of myth, blazing new aesthetic paths to new terrains.

The exhibition is organized by the Stavros Niarchos Foundation Cultural Center (SNFCC) in collaboration with ARTWORKS.

The exhibition is made possible by a grant from the Stavros Niarchos Foundation (SNF). 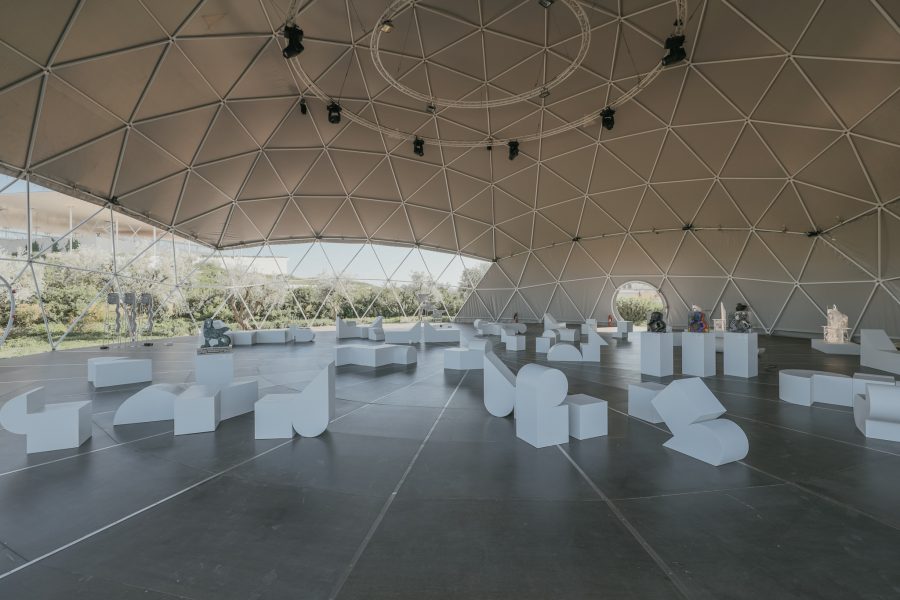 Petros Moris’s Sphinx V, VI and ΙΧ are part of his Future Bestiary series – a body of sculpture in which systems of geological materiality, uncanny language and digital fabrication unravel the entanglement of subterranean memory and the mythical, social and technological construct of the future. The series brings together an assembly of sculptural entities that originate from funerary artifacts – figures of chthonic deities believed to be protectors of life and death. The cryptic scripts that accompany these tectonic bodies were generated by neural network processing, reflecting the oracles and riddles associated with such chthonic entities in mythology. 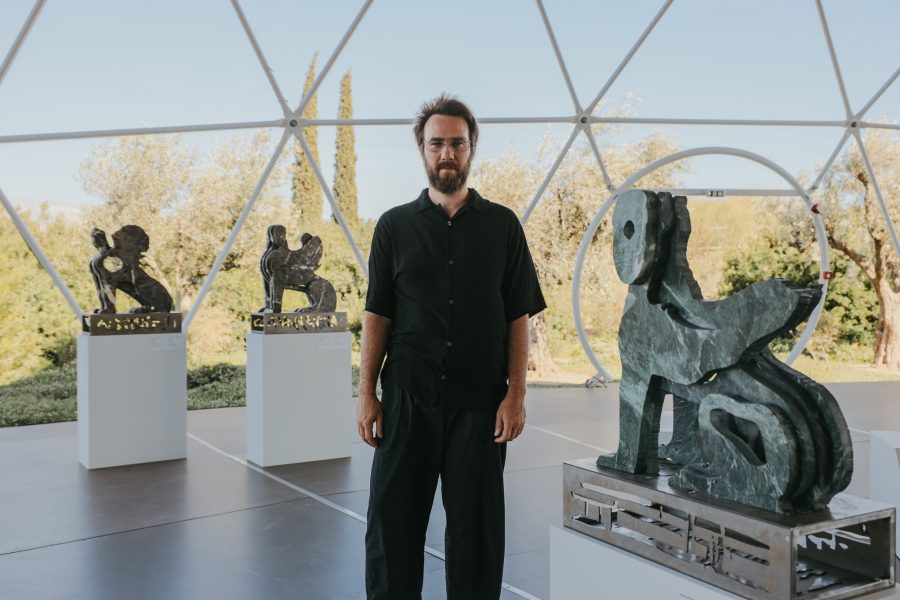 Sibyls and Harpies by Panos Profitis inhabit a mythological universe of their own. Sibyls and Harpies are creatures that transcend the rational framework of their time. Messengers of the spirit world, they possess the gift of divination, revealing what man cannot or will not face. These sculptures share common modes of representation – the human body is absent, while the intimacy of the human face is replaced by geometric forms, resulting in eerie, metaphysical figures. The eyes remain open, and the stare is frontal, unlike the other facial features, which are shown in profile. Resembling ritual or theatrical masks, these artworks are reminiscent of the typology of mythological figures and heroes, in an attempt to bring out in relief connections between the storytelling of myth and the lived reality. Assyrian, Babylonian, archaic art, through to the art of Byzantium and, later, the Soviet Union, meet science fiction, generating alien beings of anthropomorphized anatomy and oversized eyes. 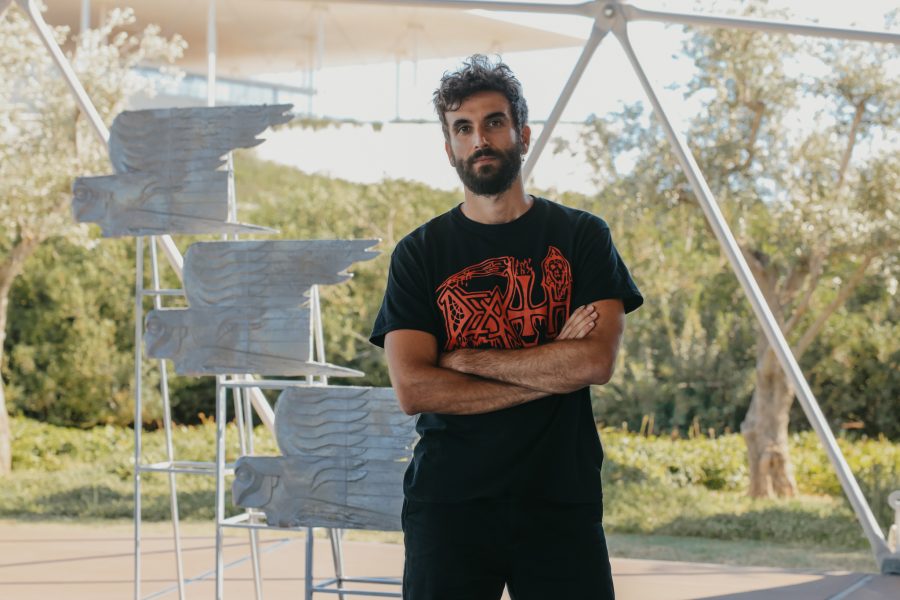 Valinia Svoronou’s ENDYMION (A Thing of Beauty Is a Joy Forever) is a stargazing mobile application – a storytelling platform for tales unfolding in tandem with celestial events. The app is powered by concepts involving the construction of myths revolving around zodiac symbols, constellations and their use in marine navigation. Starting with the ancient Greek myth of Endymion, the app uses the notion of romance as a theme for exploring East–West exchanges and their impact on contemporary mental constructs. The artist uses the tools of astronomy to configure a node where mythologies across the boundaries of time and space converse with scientific observation. As the story unfolds, Roman variations, Romantic versions and pop culture appropriations of the myth of Endymion converge. Ice Queen Chair, Endymion’s Repose (I-IV) installation involves sculptural outdoor seating for stargazing. Here, Svoronou is inspired by iconic furniture design eras and 1980s soap operas. She draws inspiration and references from Romanticism, mythology, the celestial world, art history, social sculpture and everyday life, placing them in dialogue with the built environment of the SNFCC Dome – a metaphor of the celestial dome. Here, seating as social sculpture showcases the way in which the body and the gaze exist in space. Inscribed with traces of narratives, these artworks are luminous gestures pointing to novel ways of looking at history. 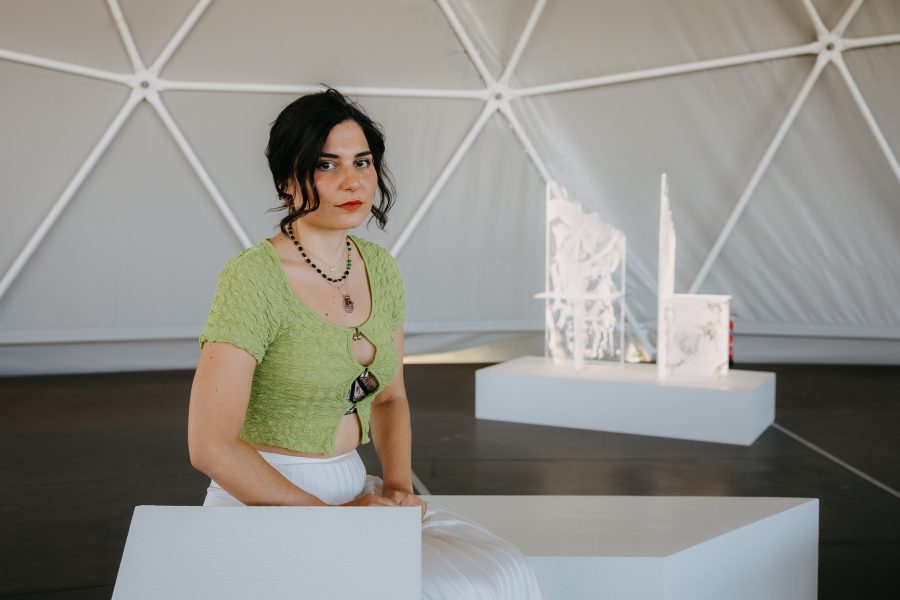 In Theodoros Giannakis’s Unfinished Ecologies, a.k.a. Gorgonion Complex Homomorphism, entities of unknown genealogy or origin manifest in physical form. The figures are projected as two gorgoneia (representations of Gorgon’s heads) between aluminum sheets acting as foggy mirrors. Gorgoneia are also associated with the Furies – chthonic deities of punishment for crimes that disrupt the natural order. This artwork makes us witness a fissure, evoking the loss of the unity of the magical way of being in the world, while attempting to find ways to restore it, all while serving as an apotropaic symbol, a technocybernetic dream, an allegorical vision, an enigma. In a semblance of homomorphic reflection, something in this sculptural group seems to interfere with the unity of the gorgoneia, which attempt to transcend deterministic divisions of the mythological, mechanical, human and natural environment. 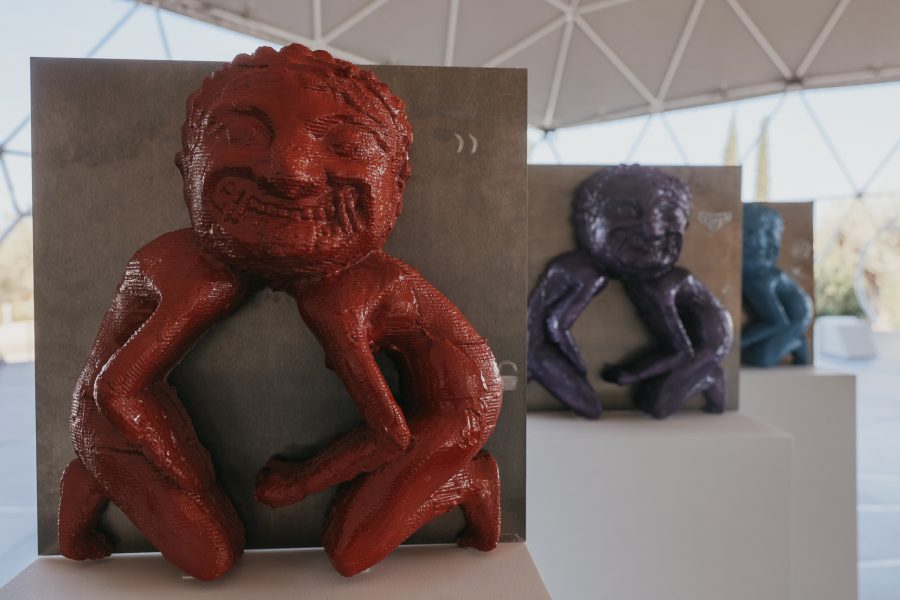 Eleni Papanastasiou has created a seating arrangement comprising 54 units of different forms, reflecting the complexity and freedom found in nature, yet inspired by the regular geometric solids featured in the design of the Dome. This installation aims to integrate simplicity and complexity, similarity and variation, structure and random, centered and eccentric. Its layout encourages visitors to move freely on the premises of the Dome. While randomly wandering around the venue, we constantly feel that our body is at the center of a sphere. 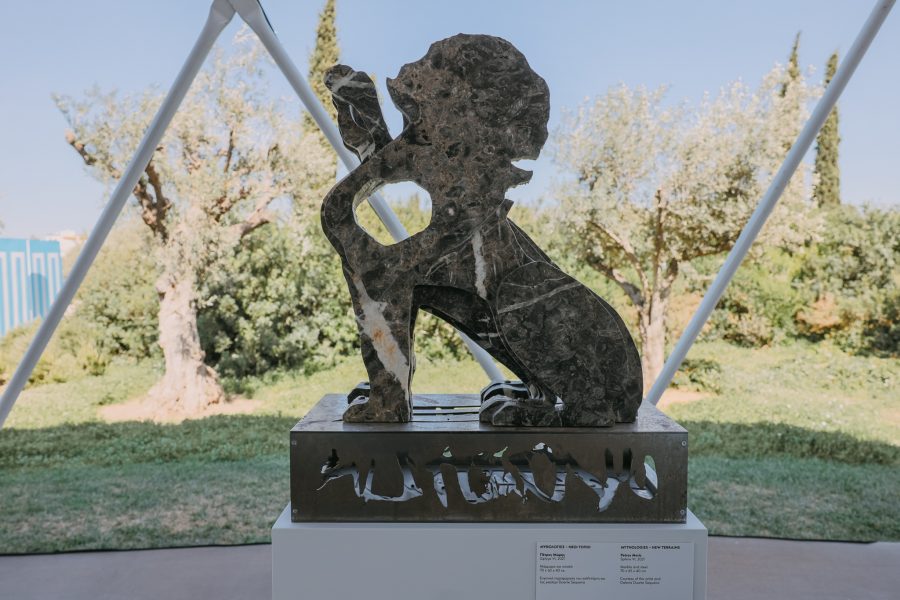 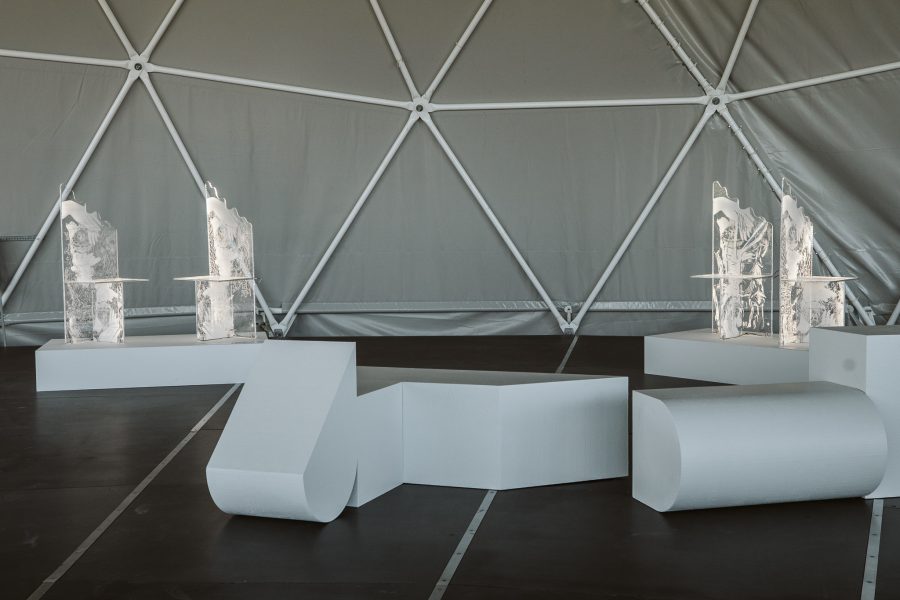 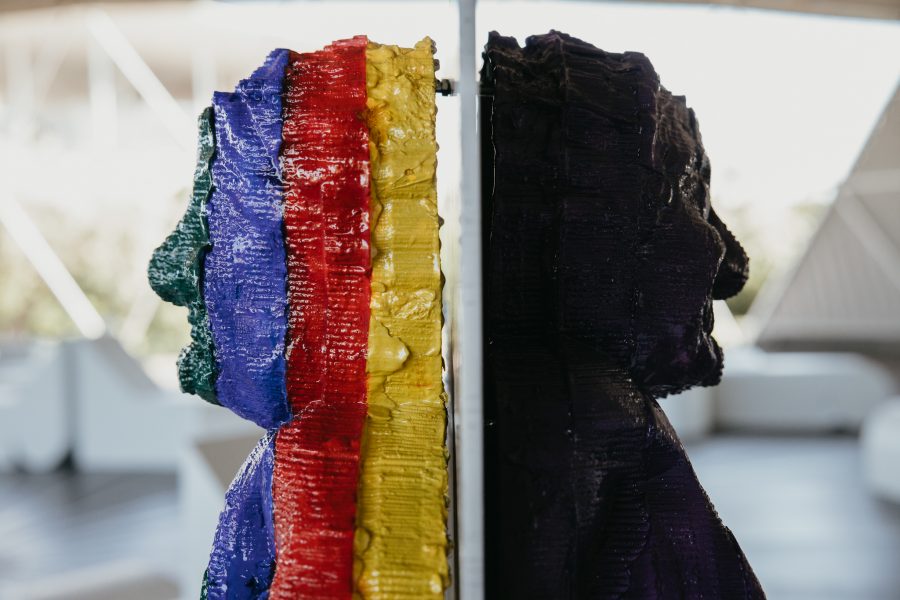 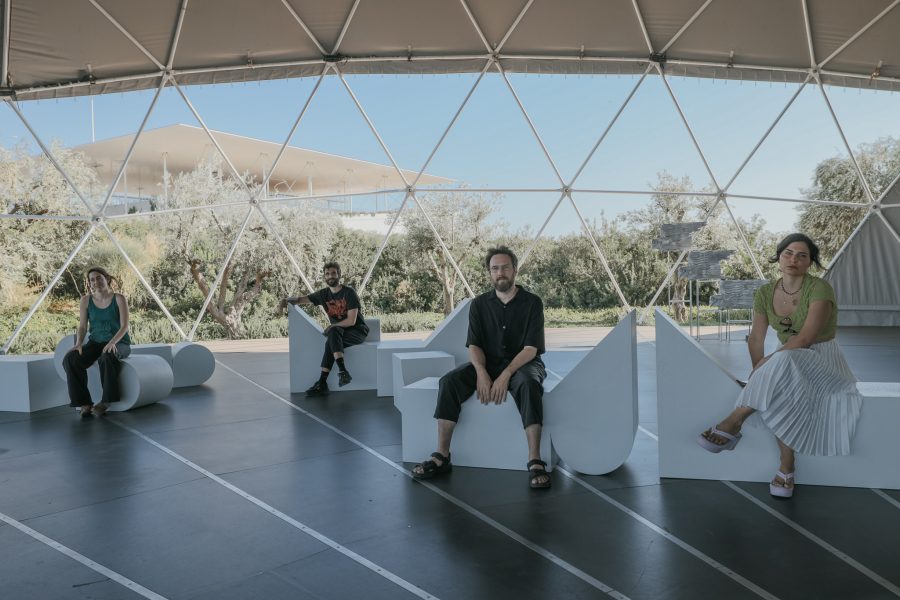