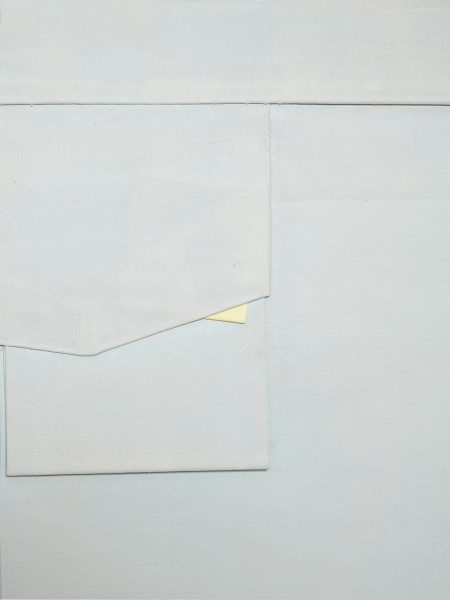 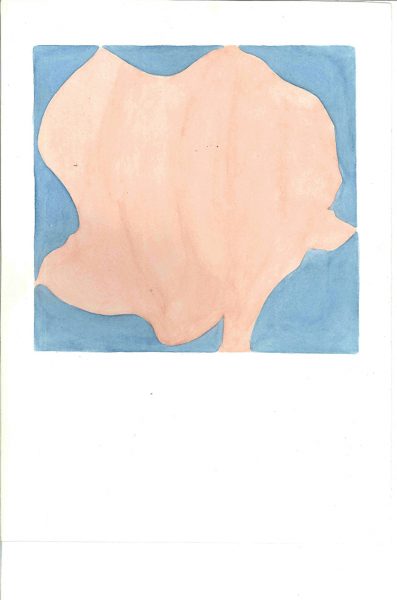 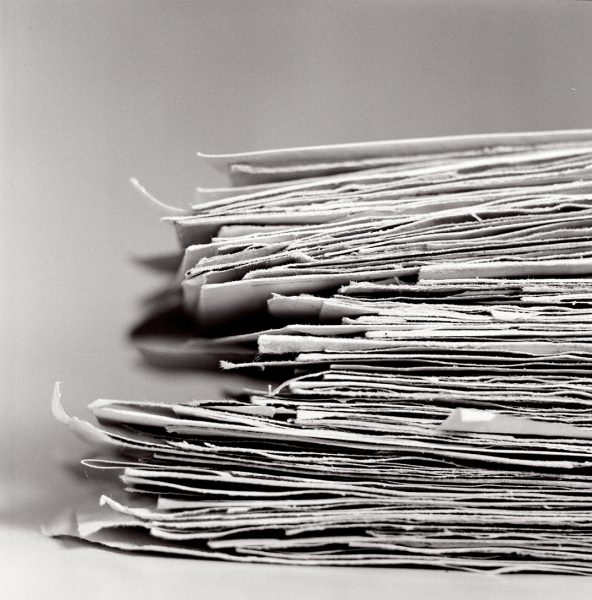 Promise is Κarolina Krasouli’s first solo exhibition in Greece. She has had two more solo exhibitions in France, in 2016 and 2020. The backbone of Promise is a series of hand-sewn canvases, painted in gesso and oil in soft, pastel colours. These mainly large-scale works evoke windows, doors, books, folded pages, and envelops. They are displayed on the wall, like regular paintings, but can just as well be set on the floor. Most were produced during the last year, specifically for the Arts Centre exhibition.

The overarching theme in this series of works is the book as both object and landscape. The folding and browsing, the abstract language, the irreplaceable space of the book in general – from the unique ambiance of an old bookstore or a good library, handmade stationery, various archival paraphernalia and writing implements to the room itself and to a writer’s cherished tools (a case in point is Roland Barthes’ handmade cards, on which he wrote his journal notes) – these populate the microcosm that Krasouli evokes on her hand-sewn canvases.

Krasouli’s works are complex and elaborate, as sophisticated as an haute-couture garment. Using a time-consuming and laborious process that involves preparing the canvas, painting it, followed by folding, sewing, and ironing, the artist creates paintings that ‘express innocence of mind’, to quote Agnes Martin’s apt remark on the 30 screenprints of On a Clear Day series (1973).

‘This series of works on hand-sewn canvases evolved from my project inspired by Emily Dickinson’s envelop poems in 2016.[i] What I kept from that series is the evocation of paper, of a sheet through painting,’ Krasouli notes and continues, ‘This series came as a result of a small-scale painting (A Further Migration, 2018), in which I painted a stack of paper in a realistic manner. What I loved about this project is how we can sense the spaces of the sheets underneath without actually seeing them. That’s why I made the first cloths – on a much larger scale and using painting materials (canvas, gesso, powders, and oil).

The hand-sewn canvases are complemented by 60 watercolours on paper, titled Depths of Green (2021). ‘Repetition was also at the core of my work for the watercolour series,’ explains Krasouli. ‘When I embarked on this project, I had recently read Virginia Woolf’s The Waves and I made this note (hence the title): ‘Flower after flower is specked on the depths of green.’ I also noted: ‘The real flower on the window-sill was attended by a phantom flower. Yet the phantom was part of the flower, for when a bud broke free the paler flower in the glass opened a bud too.’[ii]

The artist goes on: ‘In this series I loved this concept of the double, the doppelgänger, the mirroring,’ she says, citing as her main influence Mike Kelley’s essay ‘Playing with Dead Things: On the Uncanny’ (1993). ‘Other artists I look at are Anna Oppermann, in terms of repetition and encapsulation, Mark Manders, and especially works involving stationery. I always look at Agnes Martin, Giotto and his colours, a lot of films, especially Leos Carax.’ To that eclectic list of artists cited by Krasouli might be added the Belgian painter Raoul De Keyser (1930–2012), who systematically explored the representational possibilities of abstraction.

What more could be added while looking at Krasouli’s works? Promise is silent art and as such invites contemplation – a visionary ‘contemplation… [that] entails self-forgetfulness on the part of the spectator,’ Susan Sontag aptly argues in her essay ‘The Aesthetics of Silence’. [iii] ‘The spectator would approach art as he does a landscape. A landscape doesn’t demand from the spectator his “understanding,” his imputations of significance, his anxieties and sympathies; it demands, rather, his absence, that he not add anything to it,’ Sontag writes.

Without a doubt, the word promise and the associated verb are weighty words. Like love and I love you, they carry a certain weight – they don’t come out easily. However, Krasouli’s work promises a lot and delivers even more – a new understanding of the meaning of painting today. In its fragmentation and serenity, in the sense of silence it conveys, her paintings annihilate you, take a weight off you. The heaviness of being lightens up, grows wings. Karolina Krasouli’s Promise promises a miracle – a different approach to painting and for that reason deserves our attention.

OPANDA curator of exhibitions and events