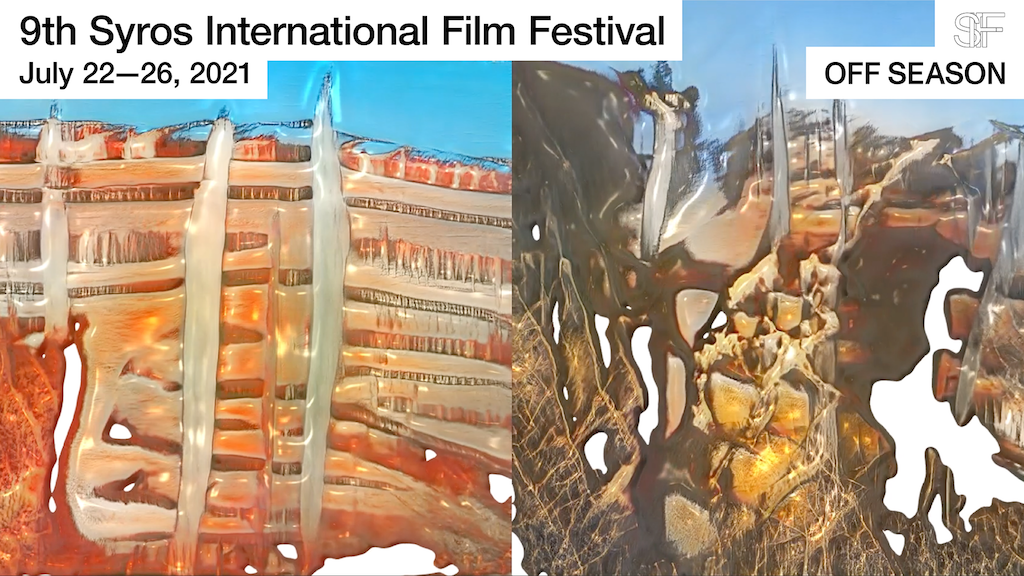 Two Fellows take part in the 9th Syros International Film Festival (SIFF). Eleni Bagaki’s short film The Film will be screening on Friday June 23rd within the Short Films Program, while Dimitra Kondylatous’ short film Backyard With a View  will be on view the next day (Saturday July 24th) during the Program DELLAGRAZIA DRIVE-IN, POSIDONIA. Dimitra will be holding an open discussion the next day around her film at Ploes, Ermoupoli.

The 9th Syros International Film Festival, which takes place on the island of Syros between July 22–26, 2021 and is held with the support of the Stavros Niarchos Foundation (SNF) compirses of films from diverse geographic, social, and cultural contexts, workshops, talks, original commissions, audiovisual installations and performances From classic masterpieces to contemporary experimental cinema and from Russia to the USA and Europe, SIFF combines various art forms, formats, sounds and cultures in repurposed locations across the island!

The edition’s theme “Off Season,” continued from 2020, proposes an alternative perspective in periods of crisis, focusing on different perceptions of time, the different “speeds” at which humanity operates, limits on movement and mobility as well as the management of personal time and leisure as a fundamental human right.

SIFF presents two original commissions that take up these new perspectives of “Off Season” by making use of rare archival materials. Cheirographon by editor Harout Arakelian and music archivist Ian Nagoski is an ode to diaspora immigration to the United States in the first half of the 20th century, using found footage from both archival material and feature films, with an original soundtrack that blends rare recordings from various immigrant communities of that period. Selected texts will be narrated live at the screening, synthesizing archival, mash-up and performative techniques in an invocation of past movements.

The Festival’s second major commission, Launching Ceremony, is a site-specific audiovisual installation conceived by filmmaker and visual artist Marina Gioti, realized with the support of NEON Organization for Culture and Development, and in partnership with the Greek Film Archive. Gioti’s new project focuses on the ceremonial launch of a new vessel, compiling a montage of mid century archival footage from Greek and international newsreels aiming to bring an intentional anachronism face to face with the present moment. Thessaloniki-based composer and thereminist May Roosevelt composes the film’s score, which will be performed live at the opening on July 23 at 21:00. Both the performance and installation are hosted in the historic Tarsanas Shipyard in Hermoupolis, Syros.

SIFF’s Drive-In in Dellagrazia this year includes Michael Powell and Emeric Pressburger’s A Matter of Life and Death (United Kingdom, 1946), a humanistic film which traverses time and space to make a case for the transcendent value of love, paired in a double feature program with one of the greatest visual poets of our time, Claire Denis, with her hypnotic images of Beau Travail (France, 1999), an adaptation of Herman Melville’s Billy Budd that culminates in one of the more startling, unforgettable endings of modern cinema.

Retrospective and contemporary Greek film production is present with The Years of the Big Heat (Greece, 1991) by the influential filmmaker and poet Frida Liappa, a free rendition of Electra’s myth which is set in a completely imaginary state, while visual artist Eleni Bagaki presents the short The Film, part of the project “A book, a film, and a soundtrack,” which was commissioned by Radio Athènes. The film draws inspiration from a failed romantic relationship and leads us to an unlikely encounter between tones, forms, scenes, moods, and desires.